In April 2018, I thru-hiked the West Highland Way, a 154.5 kilometre (or 96 mile) trail which runs from Milngavie (pronounced ‘Mulguy,’) just north of Glasgow to spectacular mountain town Fort William, which sits at western end of the Great Glen Fault, at the mouth of Loch Linnhe. The trail traverses through picturesque Scottish farmland, over mighty Conic Hill then along the lushly forested shores of famous Loch Lomond. From there, it cuts north into the West Highlands, where vast open spaces are spotted with snowy white sheep and broken with shimmering deep black creeks. Mountains ring the trail; waterfalls and heather are everywhere. After nearly touching Loch Tulla, the trail cuts north across Rannoch Moor, following an ancient road bed to Glencoe. The trail climbs over a pass, dips to Kinlochleven, then finally ends after a mountain trek in Glen Nevis, at the foot of the United Kingdom’s tallest peak, Ben Nevis. It’s a fantastic trail which is riddled in history, natural beauty, and a lot of water.

Don’t forget your Gore-tex here! Not only is Scotland derisive of weather forecasts, but with very few trees, it is also an incredibly windy country, with gusts which threatened to push me off trail. If you ever choose to follow in my footsteps on the Way, or even just visit Scotland in general, I’d recommend a full set of waterproof layers – Scotland is just that wet. At one point, I felt foolish for carrying more than two litres of drinking water in my pack, since generally, every few hundred metres or so there’s a water source, so bring a lightweight filter so that you can fill up at your convenience. Water is literally almost everywhere in this country!

As far as adventures go, the West Highland Way falls somewhere between a great cultural experience such as the El Camino de Santiago and a wilderness adventure, however, if you’re seeking solitude, this isn’t the place to find it. While Scotland is stunningly beautiful, on the West Highland Way you can expect to encounter civilization rather frequently, meaning that you’re never far away from people or town. Locals use it as a foot path; an artery for dog walking, trail running and just getting outside. The trail is also frequently a road walk, although you’ll come to appreciate these flat(ish) sections after several hours of Loch Lomond’s shoreline. There’s always somebody nearby, so help is always close at hand if you happen to run into trouble – if you’re looking for a place to shout without anyone hearing you, this isn’t it. If you’re looking for a great way to experience Scotland, to really see its landscape and talk to its wonderfully friendly people, this is it! 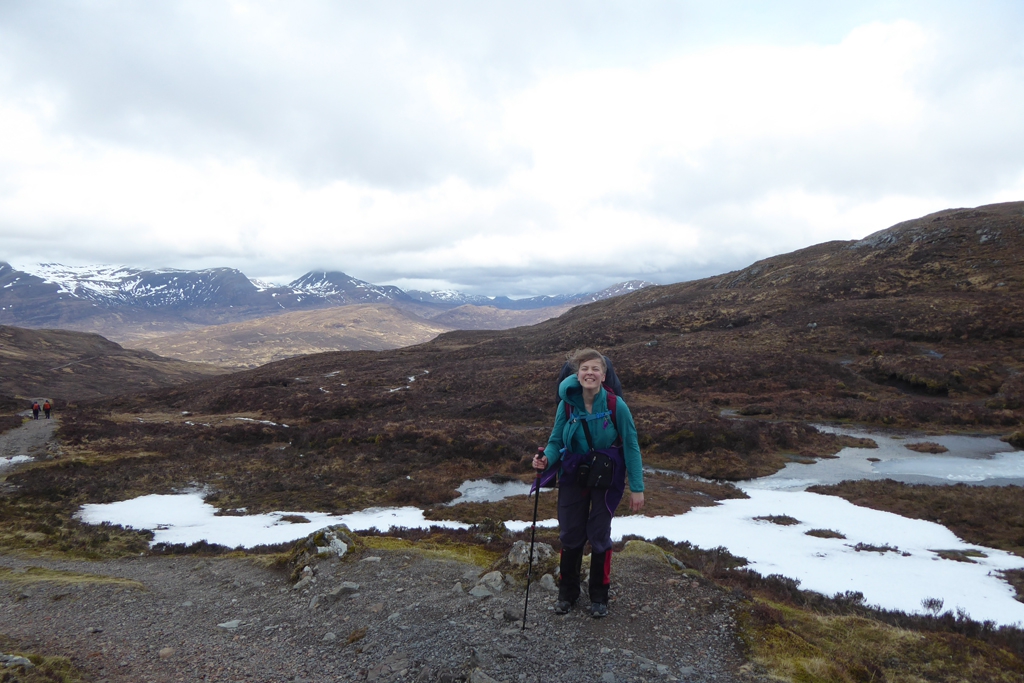 This is a great adventure for solo and female travelers. Scotland is a very safe country with people who are generally trustworthy and absolutely no large predators. There’s no bears here to steal your Cliff Bars – in fact, there’s hardly even any squirrels, the Eurasian red squirrel of Beatrix Potter’s famous children’s books happening to be an endangered species.

Scotland was almost completely deforested hundreds of years ago, so with animal life which was adapted to the vanished forest, the Highlands can be eerily quiet. There’s deer to be seen here, and the odd bird, but compared to Scotland’s patches of lush forest, the Highlands lay silent, the wind which rushes through the deceptive peaks sounding lonely, as if remembering the trees which once stood in the mountains’ shadows. There’s no wolves here to sing in the cold of night, no lynxes to pad its mossy forest floor in search of hares or mice – you might see the odd fox, but of the great beasts which once roamed this land, there’s nothing left. The haunting empty landscape of the Way made me appreciate the biodiversity of British Columbia all the more – here, we still have our predators.

The Way is riddled with history – the paths and roads which you stride are the work of soldiers and drovers long gone. At every turn, there’s some reminder that this place is old – that western civilization has been here far longer than one can completely fathom, even knowing the facts. As I walked the Way, I discovered moss covered ruins hidden in the green depths of the forest, minute graveyards on tiny hills, and the crumbling remains of little farms in windswept glens. I walked across the site of a battlefield, climbed to the remnant of an ancient hill fort which was once literally melted in an intense fire eons ago, and padded by a pile of stones representing a memorial to a slaughtered Scottish clan.

In Scotland, the people have the Right to Roam, so on my trek of the Way, I wild camped as much as I could. Leave no trace principles apply, but basically, so long as you follow the rules, you can camp just about anywhere. Although I loved the secret campsites which I found, I really don’t recommend this tactic for hiking the Way. Instead, do the smart thing – day hike it from town to town. There’s just not enough wilderness on the Way to justify wild camping, so do yourself a favour by carrying just a light pack instead. There’s luggage moving services in plenty, so you don’t have to worry about your suitcase. This makes the trail awesome for just about anybody, although this certainly isn’t a trail for those who aren’t reasonably fit. There’s some very technical sections with uneven trail, challenging obstacles and elevation gain (although nothing comparing to some of the steep trails which we can roam here in British Columbia!) At the very least, you must be able to climb over the rickety wooden stile gates which separate the expansive sheep pastures which you will travel through.

I found that food can be scarce, so it is best if you bring a supply with you and if you wild camp like I did, you’ll have to pick up fuel in Glasgow at a store like Tiso, since isobutane canisters cannot be transported via airplane. Believe it or not, despite the United Kingdom’s reputation for being expensive, food can be found cheaply if you stock up at stores like Lidl, where it’s relatively cheap, even with conversion. On trail, there’s excellent chow to be found in places like Balmaha and in Tyndrum, which boasts the outstanding Real Food Café. Along the Way you’ll find several places with Honesty Boxes, little unmanned stands where I found everything from tasty homemade Scottish tablet (a fudge-like treat,) to local favourite soft drink IRN BRU to fresh fruit from Spain to bottles of water and Mars Bars. I came to love these boxes, and I always kept a few Pounds Sterling handy for the joyful occasion of finding them! 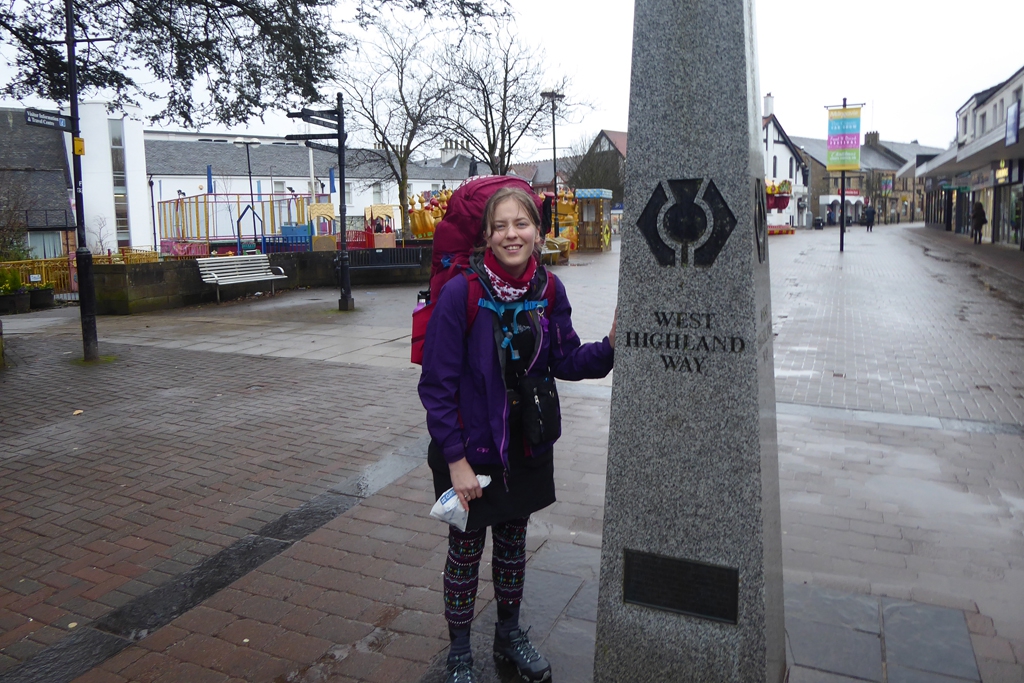 In closing, here’s a summary of this outstanding trail, which definitely belongs on your bucket list:

Length: 154.6 km (96 miles)
Runs between: Milngavie and Fort William
Best hiked: south to north (for best elevation gain situation – I would never consider hiking Conic Hill north to south, but I considered it enjoyable south to north!)
Months to hike it: April to October
Most people hike it: May
Biggest complaint: besides rain and wind, people dread the midges (which are tiny bitey swarming insects,) but you should also beware of ticks, so bring tweezers as well as repellent. There’s tons along Loch Lomond!
Biggest danger: with rain and wind comes the danger of hypothermia, which should never be underestimated. Layer accordingly and be prepared, no matter how you walk the trail. Scotland loves its inclement weather and it laughs at the weatherman!
Recommendations: At the very least, bring a map or a smartphone with a GPS app like ViewRanger. Map tiles for the GPS can be downloaded in advance, so you don’t need to worry about wifi. While the Way is generally well marked, there are patches where it isn’t, especially on the first day and I was grateful that I had something to refer to when I wasn’t sure where to go next. Research the trail through the great website, Walkhighlands.co.uk, which has a wonderful page entirely dedicated to the West Highland Way. Bring your trekking poles! 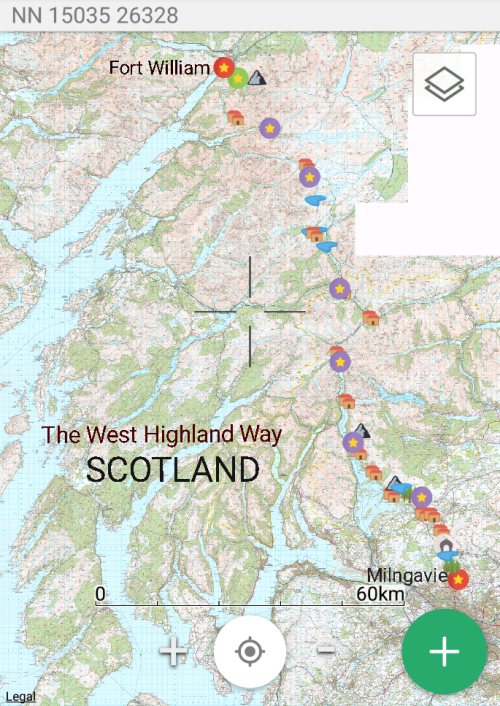 Rosanna (Rosy) P. Brost works at our Valhalla Pure Outfitters Vernon store. When she isn’t at the shop helping people get set up with gear, she can be found wandering around the backcountry singing songs from Game of Thrones to ward off any bears! Check out more of Rosy’s adventures, writings and artwork on her site: http://rosannapbrost.tumblr.com