My Norrona sales rep, Frode, emailed me in mid January about a backcountry ski festival that Norrona sponsors in Norway every year and offered to fly me over for it. I had to read the email a few times to make sure I wasn’t dreaming. How often do you get offered a free trip to Europe and to go skiing none the less? Once the shock wore off I booked my flights and started hitting the gym as I had two months to get back into shape.

March came and I headed to the airport for a long journey over to Norway. I arrived at Gardermoen airport in the late evening after a day and a half of travel and hopped on the train into Oslo. It took about 30 minutes and then had to find my way to the beautiful Scandic Holmenkollen Park Hotel. After trying to figure out the train system, jet lag and exhaustion started to take effect and I hopped in a cab. I got to the hotel, checked in and crawled into bed excited, but exhausted. 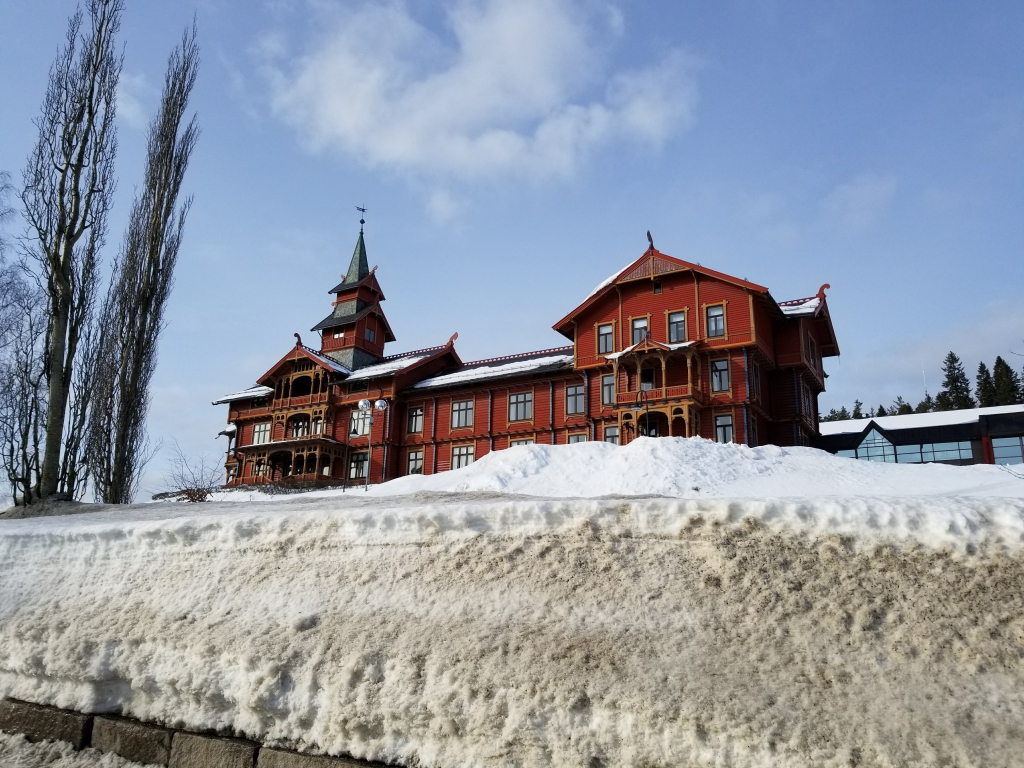 The next morning I woke up to sunshine and snow everywhere outside my hotel window. I headed down for breakfast and was greeted with a lobby and restaurant packed full of Olympic athletes. The hotel is located next to the Helmenkollen ski jump and cross country ski trails and was hosting an Olympic biathlon qualification. It was a bit intimidating sitting in the restaurant surrounded by such exceptional, driven and physically fit individuals all proudly wearing their countries colors. I had the rest of the day to myself in Oslo and once I finished breakfast I headed to the front desk to try to get some info about what to see and how to get there in the city. With a fresh mind the train system seemed much simpler to use than it did the previous evening. I grabbed my jacket and headed to the train stop.

I walked out of the hotel and was greeted with an amazing view of Oslo. I headed down to the train station and waited for the next train. Once it arrived I hopped on and was immediately shocked to see someone standing in a serious cross country ski outfit with his skis in hand. I thought he was a bit odd but at the next stop a couple more people hopped on with their skis. At the next stop some kids hopped on with seriously fast looking toboggans. I would learn that the train runs right to the local ski hill and Norwegians are very serious about their winter sports and by the end of the trip I got used to dodging skis being slung over peoples shoulders on the subway. I walked around the city center for a few hours and checked out the Norrona flagship store. It was great to see every single product they make in person.

After an afternoon nap, I woke up feeling refreshed and went down to the lobby to meet Jordan and Sunny from Evo Outdoors in the states who were also guests of Frode. We hopped on the train and headed back downtown to meet up with Frode for dinner. I’m an adventurous eater and was hoping to try some traditional Norwegian food but we ended up going to a fantastic Spanish tapas restaurant.

The next morning we were picked up by a Norrona employee and driven to the Norrona head office to be shown around and to learn more about the company. Norrona started in 1929 and is still owned by the same family. They have an incredible history and it was cool to see some of the ground-breaking pieces of equipment they had come out with in the past like the very first Gore-Tex jacket in Europe brought out in 1978 when Gore-Tex first hit the market.  After learning of all their environmental and ethical initiatives I was blown away and certain that they are among the elite when it comes to these issues. It is something that plays a major part in every aspect of the business and they feel a massive corporate responsibility to their customers and this amazing planet we live on. 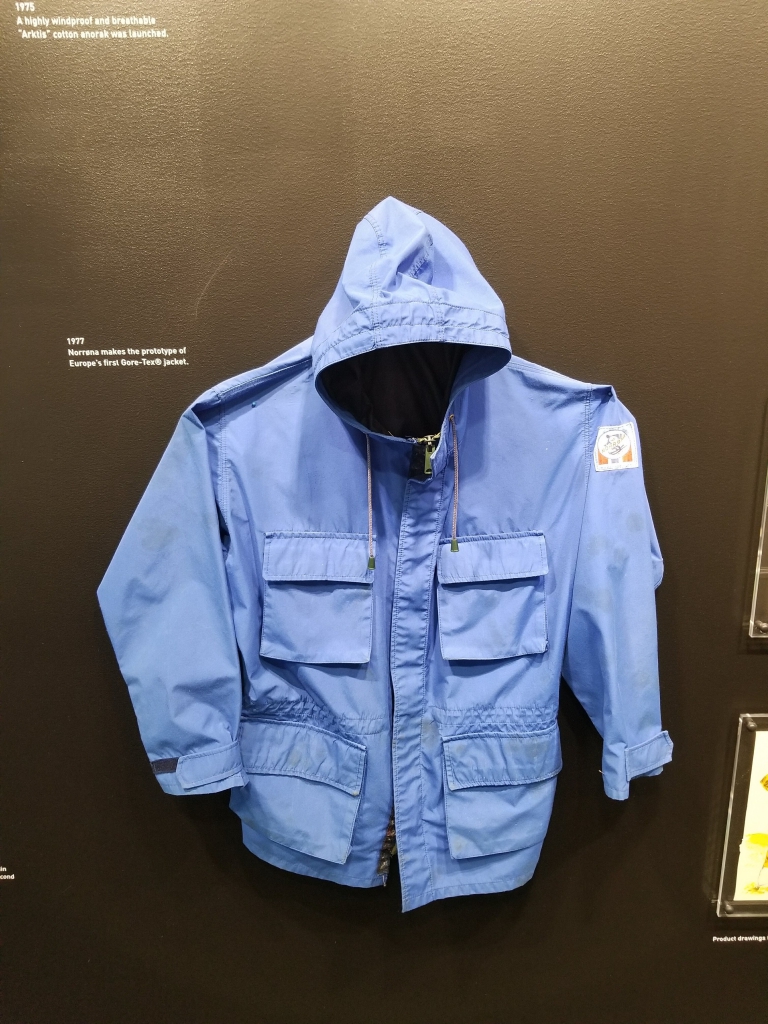 First ever Gore-Tex jacket in Europe from 1978. This jacket is still in their product line.

Next we headed back to the airport and flew to Alesund on the west coast on Norway. We then hopped on a small yacht and headed down a fjord to the small village of Saebo in the Sunmore area where the ski festival was being held. With one hotel and a hand full of houses, it felt like the village doubled in size when all 300 people ascended on it for the ski festival. 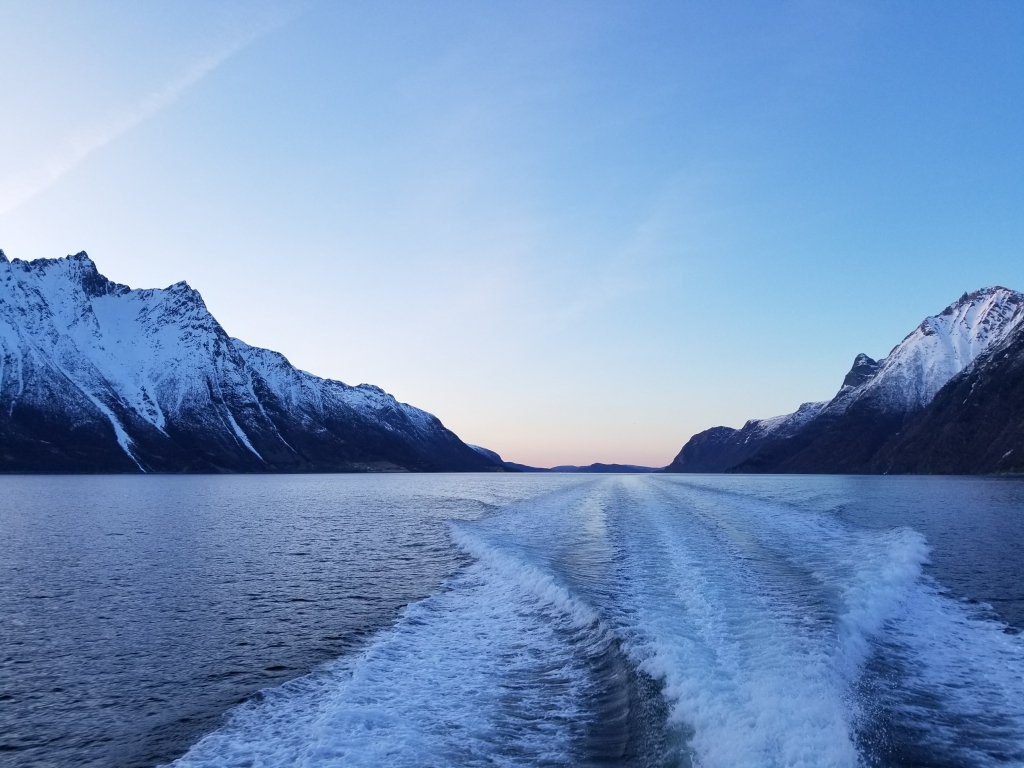 The next morning we woke up to sunshine and the crisp cool air. We hopped into a van and drove for about 20 minutes to meet our local ski guide, Asbjorn. We put our skins and skis on and started for a distant peak. The scenery was amazing and it was hard not to get lost staring at the views. As we got higher the views got even more amazing, the sun got warmer and by lunch we were in our t-shirts sitting on the side of a mountain enjoying each others company. By early afternoon we had reached the top and had an amazing 360 degree view of the fjords and steep peaks of western Norway. 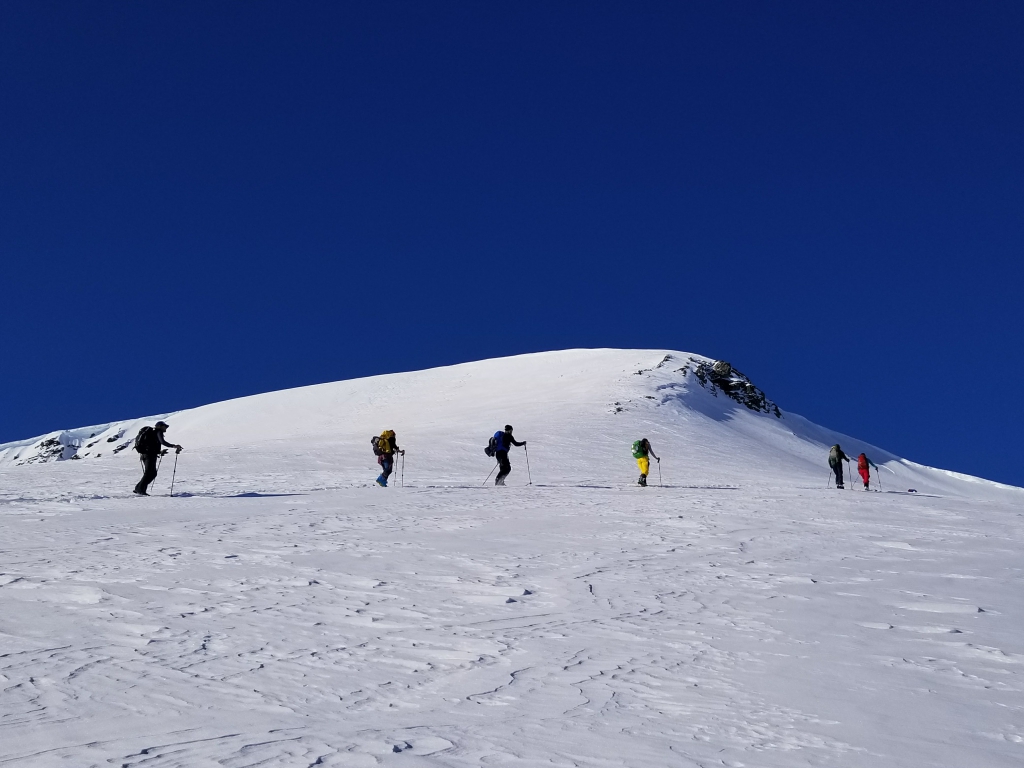 Skinning up on the first day 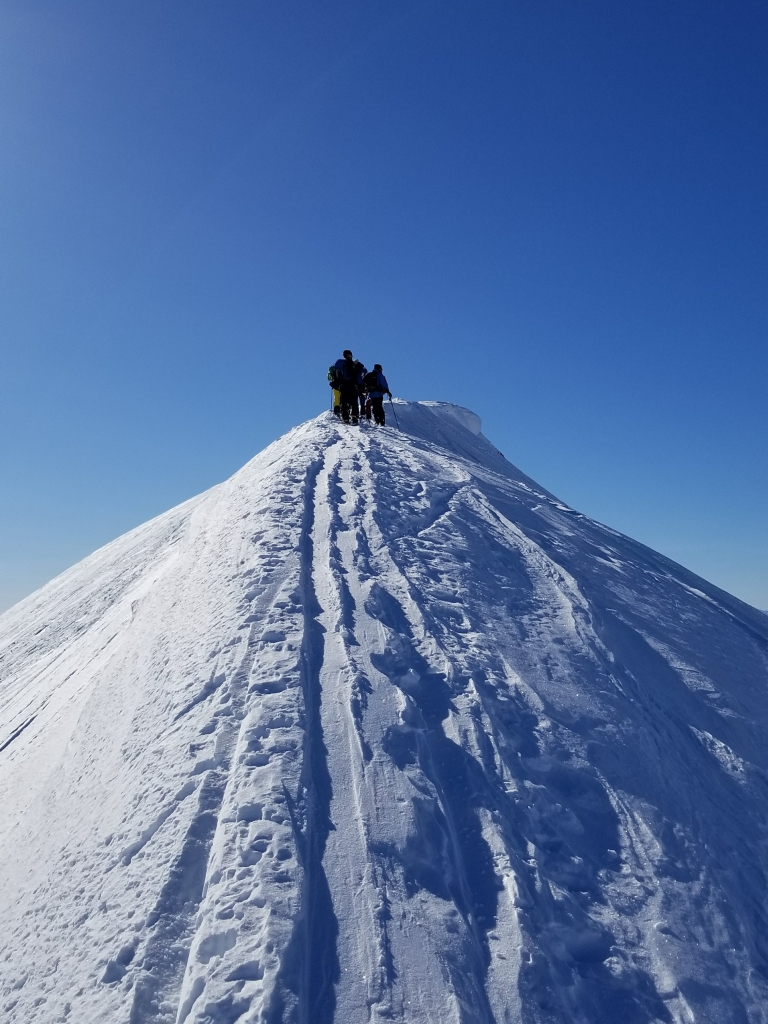 Almost at the top

Now time for the fun part. We got to an area with no tracks (which is difficult in this area as it is a hot-spot for backcountry skiing) and started down. The snow was soft, deep and amazing. We skied back to the cars and headed back to the hotel. We arrived back in the late afternoon just as the band was starting on the stag setup outside the hotel. We all grabbed a beer and enjoy the music and exchanged stories of our day. Over dinner I sat across the table from a guy who was wearing a hat from our store in Nelson, BC. What are the odds?!

The next morning we again woke up to sunshine. It was a bit colder this morning and we all hopped onto a ferry which took us across the fjord where we jumped on a bus and drove to the back side of the mountain range. We strapped on our skis and headed for another distance peak. We skinned up in the shadow of the highest peak in the area and as we got to the top we were greeted with an amazing view of the fjord from which we crossed earlier in the morning and the one we would head back down the following day to get back to Oslo. The view was one of the most amazing things I had every seen. As we were heading back down always having the fjord insight. This is truly what you imagine skiing in Norway to be like.  The day offered a truly unique skiing experience, one of which I am sure I will never experience again unless I head back there. We all grabbed a beer when we got back to the hotel and sat by the fire swapping stories with many of the people who were there from all over Europe. It was an amazing end to an amazing trip and one that I will remember for the rest of my life. 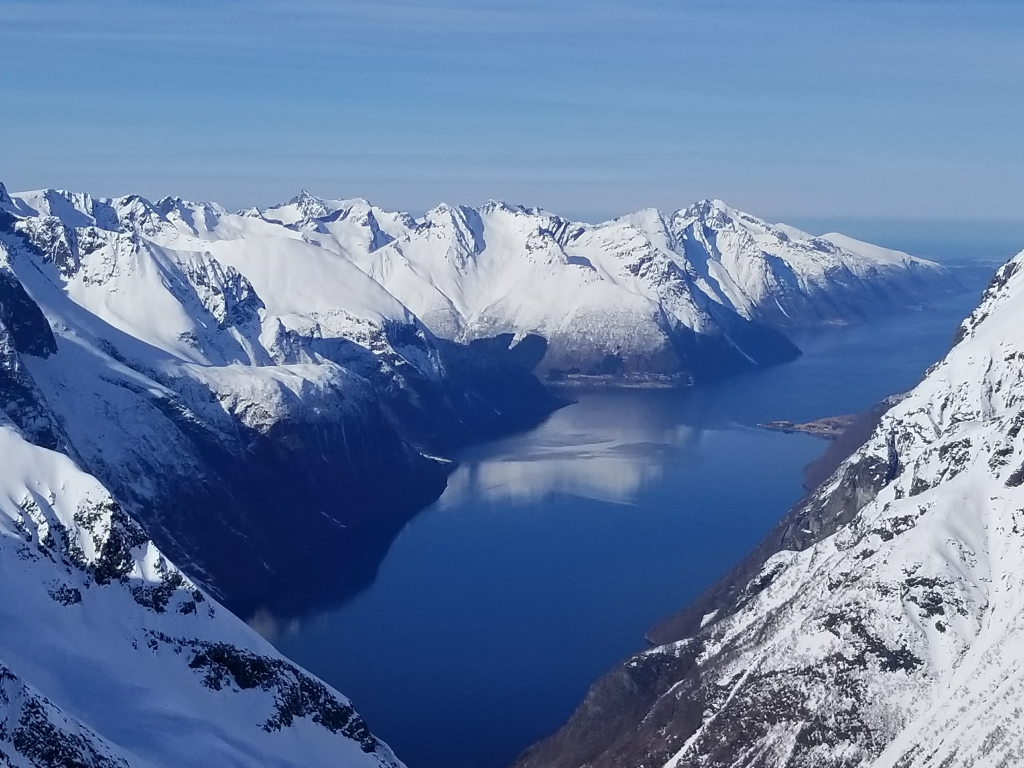 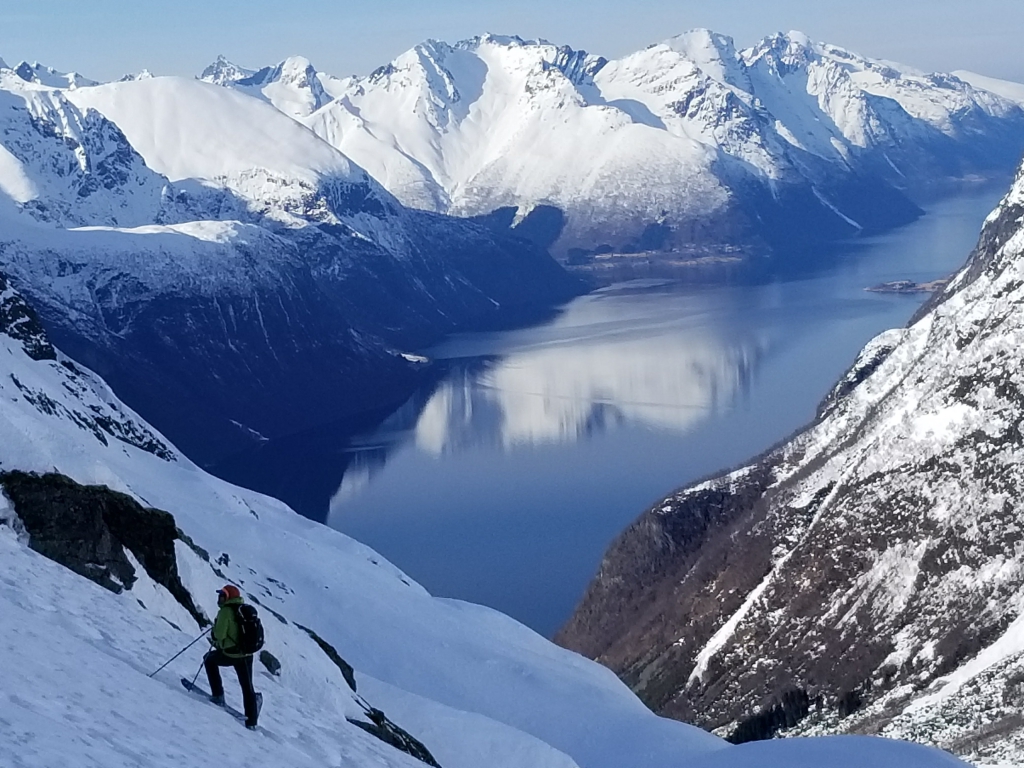 The ski down on day two 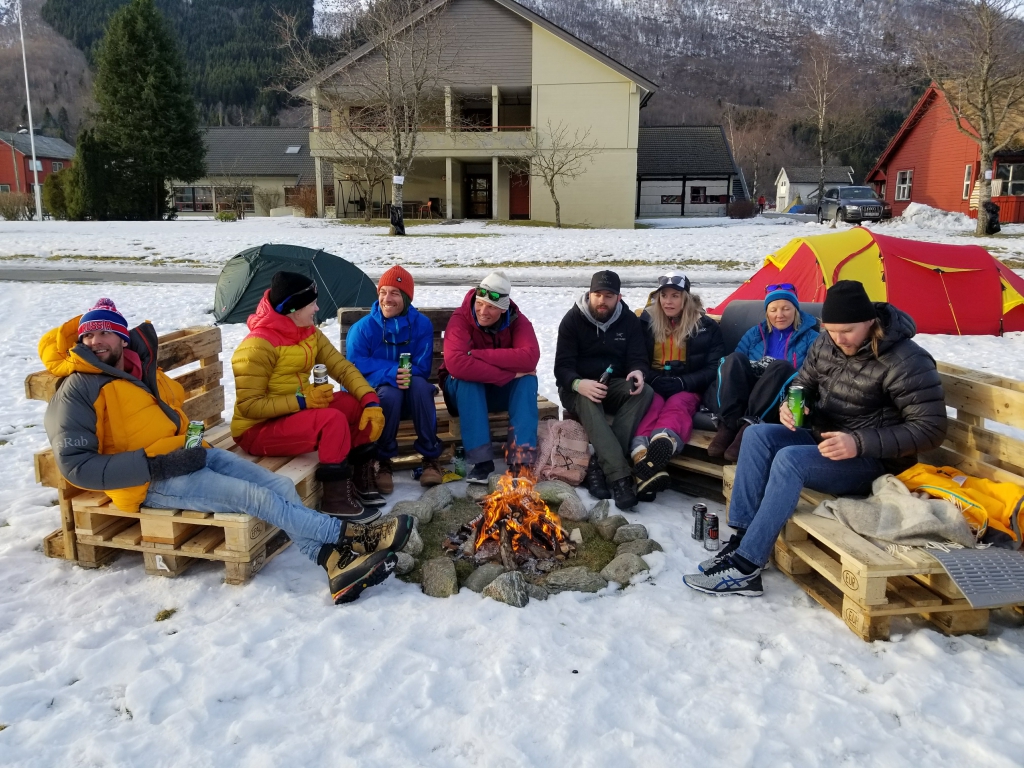 Hanging out at camp at the end of Day 2 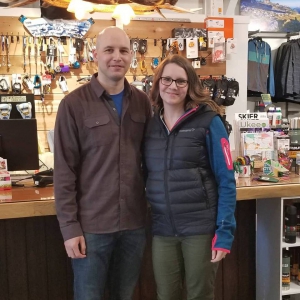 Originally from a small town in central Alberta I grew up playing hockey. Once I graduated from high school I took up skiing. My wife and I moved here in March of 2017 and opened the store in April. I enjoy hiking, backpacking, skiing and have been climbing more. I have spent some time over the last 6 years alpine climbing, ski touring and ice climbing in the Rockies.